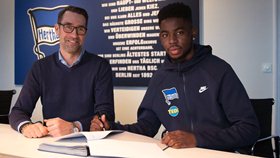 Germany U21 international Jordan Torunarigha is being linked with a transfer to Turkish side Fenerbahce in the January transfer window.
Turkish newspaper Hurriyet has claimed that the central defender has agreed terms with Fenerbahce and the Yellow Canaries are set to announce his signing in the coming days.
A loan deal for the remainder of the 2019-2020 season is being mooted but it remains to be seen whether Hertha Berlin manager Jürgen Klinsmann will sanction his departure from the Old Lady this winter.
Jordan Torunarigha has found game time hard to come by this term, making only one start from a possible 17 games in the German Bundesliga, whereas last season he was named in the starting line-up on thirteen occasions for league matches.
He will link up with former Nigeria international Victor Moses at Fenerbahce if the transfer materializes.
Torunarigha started his professional career at Hertha BSC after he was promoted from the club's youth team.
Igho Kingsley
Photo Credit : herthabsc.de