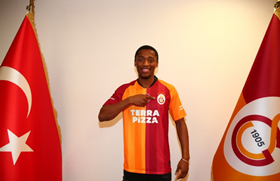 Galatasaray have completed the signing of Nigerian winger Jesse Sekidika from Eskisehirspor, the official website of the Turkish Super Lig champions reported on Thursday afternoon.
The former Manchester United trialist has put pen to paper on a four-and-a-half-year deal that will keep him at the Istanbul club until at least the end of the 2023-2024 season.
For the remainder of the season, Jesse will pocket 125,000 euros and will be paid 250,000 euros each for four seasons starting from the 2020-2021 campaign, bringing the total package to €1,125,000 (approximately N446.6 million in Nigerian currency) over the duration of his contract.
In his first words after signing the deal, the winger stated : "I came to a very big club. I am very happy. I will use this great opportunity. Galatasaray was a place I always wanted."
Galatasaray President Mustafa Cengiz added : "Jesse is a footballer who is in line with our strategic and rejuvenated policy. We believe that he will always take part in the struggle to carry the flag of Galatasaray to the top in the honest race as a soldier and a team player".
A product of Brooke House in the United Kingdom, Jesse previously wore the colours of Portuguese clubs  A. D. Oeiras and Benfica plus Napredak Krusevac in Serbia.
Ifeanyi Emmanuel
Photo Credit : galatasaray.org