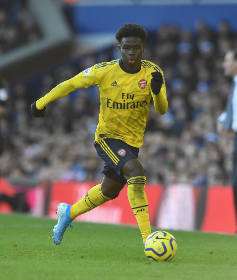 Arsenal youngster Bukayo Saka is undecided on which national team he will represent at the senior level after representing England at the youth level.

Born to Nigerian parents, Saka in 2019 intimated that he will soon make up his mind on his international allegiance.


Like Sport betting In Michigan , risks are part of sports and football in particular but could be richly rewarding and Saka will do well to realise that a fulfilling international career is best served playing for Nigeria.
Such decisions are not easy to make understandably but the Hale End Academy graduate should he opt to play for the country of his parents and be guaranteed of realistically being a first team player.

Saka is naturally a winger but recently Arsenal coaches Freddie Ljungberg (as interim coach) and Mikel Arteta (substantive head coach) have deployed him at the left back role.

That was due to injuries to the duo of Saed Kolasinac and Kieran Tierney.

Ljungberg disclosed after the 2-2 draw with Standard Liege in the Europa League last month that Saka was not happy to be playing at that position.

But the left back role for Nigeria can be a quick route to international prominence for the teenager.

Currently The Three Lions of England have the trio of Danny Rose, Ben Chilwell and Aaron Cresswell battling for the number 3 jersey, Saka will not be in this team for the 2022 World Cup surely but can be in Nigeria's squad for same tournament.

Paderborn of Germany left back Jamilu Collins is Nigeria's number one undisputed left back but  has no capable deputy or competitor.


Since the exit of Elderson Echiejile from the Eagles, players like Bryan Idowu and Ola Aina have played at left back but have never quite impressed there.
Aina is an excellent player but the right back is his primary position as a right footed player.
Saka has said that Mikel Arteta's arrival at Arsenal has improved the players and that has reflected in his game.

Saka's performance ratings as published numerous times have been impressive. His game may be reshaped at his London club with Nigeria poised to benefit from the changes.