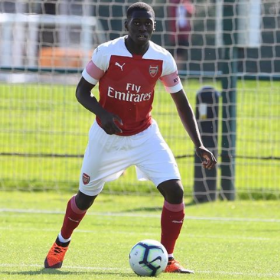 Arsenal have progressed into the fifth round of the FA Youth Cup following a hard-fought 1-0 win against Southampton on Thursday, January 9, allnigeriasoccer.com reports.
One of the standout Nigeria-eligible U18 players at Arsenal, Miguel Azeez was not involved after failing to recover from injury but five other youngsters with Nigerian blood were on parade for both teams at Meadow Park, Borehamwood.
Daniel Oyegoke and Mazeed Ogungbo were part of the Gunners four-man defence from the off, Nathan Butler-Oyedeji played behind the main striker, while former Anderlecht super kid Kazeem Olaigbe started for Southampton.
It was goalless at the break but it was the visitors who came closest to breaking the deadlock when Caleb Watts' shot struck the post in the second minute.
Five minutes before half-time, Sheyi Ojo's cousin, Zuriel Otseh-Taiwo replaced James Morris for his FA Youth Cup debut for Southampton.
Butler-Oyedeji looked lively throughou the game and one of the chances Arsenal got in the first half was from him.
A brilliant solo goal from substitute Matthew Dennis in the 80th minute handed the Gunners a 1-0 win.
Ifeanyi Emmanuel
Photo Credit : arsenal.com