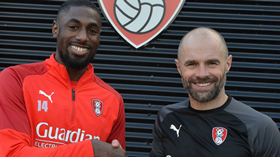 EFL League One side Rotherham United have confirmed via their official website the signing of Nigerian winger Hakeeb Adelakun, subject to FA and EFL ratification.
Adelakun, who is the first signing made by The Millers in the new decade, has joined the English third tier club on loan from Bristol City for the remainder of the 2019-2020 campaign.
The 23-year-old was linked with other Football League clubs and he has admitted that manager Paul Warne played a key role in his decision to join Rotherham United.
Adelakun told Rotherham's official website, www.themillers.co.uk :"The gaffer just told me his ideas really. Obviously I've played against his teams a few times and he's seen me, so he just told me that he'd provide me with a platform to play and work with him to help the team push on.

"Crooksy has been messaging me a bit as well to be honest, as has Freddie. Knowing familiar faces at a club that you could go to always makes it a bit easier because it helps with fitting in and getting comfortable. Hopefully, that then brings out the performances on the pitch.

"I just like to get on the ball and make stuff happen. I like to be as creative as I can be and I just want to help the team to get better."
Adelakun made his name at Scunthorpe United and previously played for the youth teams of Crystal Palace and West Ham United.
Igho Kingsley
Photo Credit : themillers.co.uk