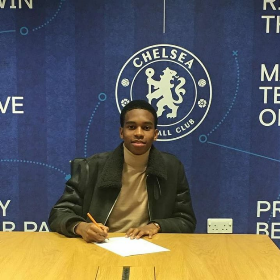 Leyton Orient starlet Malik Mothersille has inked a contract with Chelsea, according to reports.
Chelsea youth-team expert Chelsea Youth has informed via Twitter  that Malik Mothersille is arriving The Blues from Leyton Orient and will be among the new intake of Academy scholars next season.
Mothersille's scholarship deal with the Premier League side will take into effect on July 1, 2020.
He has been described as a midfielder with offensive qualities, who often gets on the scoresheet.
Prior to agreeing terms with Chelsea, he underwent trials with several clubs in England.
As previously reported by allnigeriasoccer.com, Nigerian trio Derrick Abu, Kelechi Chibueze and Prince Adegoke have all been offered scholarship deals ahead of the 2020-2021 campaign.
Should the three defensive-minded players accept the offers, they will be promoted to Chelsea U18 squad next term along with Mothersille.
Igho Kingsley
Photo Credit : twitter.com/chelseayouth