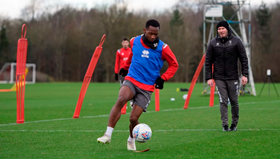 Highly-rated Nigeria-eligible midfielder Tayo Edun has ended his more than ten years association with Championship club Fulham.
The former England U20 international has today completed a permanent move to EFL League One club Lincoln City, penning a two-and-a-half-year deal that will see him remain at the Imps until the end of the 2021-2022 season.
Speaking on his new signing, manager Michael Appleton told Lincoln City's official website : "Tayo’s going to be an exciting signing for the club, I’m certain he will be.
"He’s going to take a little time to get up to speed because he’s been playing under 23’s football for a short while but ultimately we’ve got a guy who’s signed for the club, he’s committed, he’s a signing on a two-and-a-half-year deal. That’s how much we wanted him."

He added : "He was being chased by numerous clubs, at one point we thought we were out of the race but we had an opportunity to show him round and when he came in and saw the fans it blew him away."

Edun made his professional debut for the Cottagers against Leyton Orient in August 2016 and departs the London club after seven competitive appearances for the first team.
The 21-year-old, who is capable of playing at left-back, spent the first half of last season on loan at Ipswich Town.
He was a key member of the England U19 squad that won the 2017 European U19 Championship and also has caps for the Young Lions at U17 and U18 levels.
Igho Kingsley
Photo Credit : weareimps.com