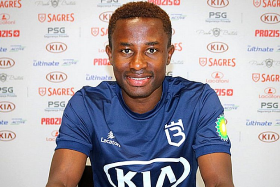 Allnigeriasoccer.com can exclusively report that Portuguese club Sporting Lisbon and Greek powerhouse Olympiakos are keeping tabs on Super Eagles left-back Chima Akas.
However, it is understood that Akas will be staying put at Belenenses SAD until at least the end of the 2019-2020 campaign as he cannot play for three different clubs in the same season.
The defender started the season with Kalmar in Sweden before switching to Belenenses SAD in August 2019.
Sporting Lisbon manager Jorge Manuel Fernandes has a complete dossier on Akas as he was coaching Belenenses before he took over the reins at The Green and Whites in September 2019.
Fernandes is monitoring the performance of his former pupil with a view to a move in the summer.
Greek Super League side Olympiakos as well as a top team in Serbia that has played in the Champions League both have their eyes on the former Enyimba and Shooting Stars man.
Akas has logged ninety minutes in each of the last four games played by Belenenses in the Liga NOS and provided an assist in his team's loss to Sporting Braga last weekend.
Ifeanyi Emmanuel