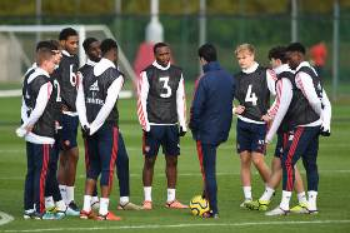 Allnigeriasoccer.com understands that Arsenal head coach Mikel Arteta ran the rule over five Nigeria-eligible youngsters, including Bukayo Saka, on Friday ahead of this afternoon's Premier League meeting with Crystal Palace at Selhurst Park.
Joining Saka in the final workout held at London Colney were Folarin Balogun, Tolaji Bola, James Olayinka and Tobi Omole.
Mikel Arteta was pictured by Arsenal's official website, arsenal.com having a chat with Balogun, Bola, Olayinka and Omole during the workout.
With the exception of Olayinka and Omole, the aforementioned players have played internationally for the Young Lions and are provisionally cap-tied to England.
Though Bola and Olayinka have yet to make their professional debuts for the Gunners, they have been knocking on the first team door, having trained with the squad several times over the festive period.
With Bosnia left-back Sead Kolašinac shaking off his injury problems, it remains to be seen whether Saka will be included in the starting line-up against the Eagles.
The Hale End Academy product has appeared in nineteen first-team games so far this season.
Ifeanyi Emmanuel
Photo Credit : arsenal.com