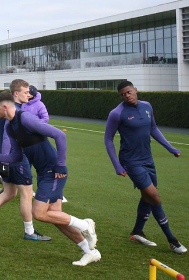 Manager Jose Mourinho promoted promising London-born Nigeria-eligible defender Timothy Eyoma to first team training on Friday ahead of the star match in the Premier League this weekend against Liverpool.
The 2017 U17 World Cup winner was snapped training with Tottenham's first teamers such as Son Heung-min, Toby Alderweireld, Victor Wanyama and Ryan Sessegnon as they prepared for the big game against the Premier League leaders.
Although Eyoma has yet to make his Premier League debut, he was a non-playing substitute against Burnley in December 2018, before making his professional debut against Tranmere Rovers in an Emirates FA Cup clash last January.
The highly-rated teenager, who is an influential member of Spurs U23 side, has also been named in the 18 for the League Cup and that was last season against West Ham.
He had a fantastic pre-season with the first team in 2018 and was rewarded with a professional contract in September of that year.
Tottenham Hotspur have been flying since the appointment of Mourinho as coach but they have only managed to keep only one clean-sheet in twelve matches across all competitions.
Eyoma is comfortable playing as a central defender and right back.
Ifeanyi Emmanuel
Photo Credit : tottenhamhotspur.com