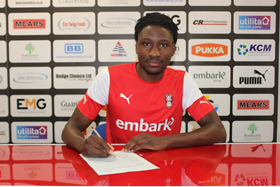 Through their official website, Championship club Huddersfield Town have confirmed that Nigerian defender Mustapha Olagunju has joined Tadcaster Albion on loan.
The talented center back, who plays for the Terriers Academy, will spend the next one month at the Northern Premier League Division One North West club.
Olagunju has made 26 appearances in total for Huddersfield Town's development, U19 and U17 teams this term, scoring two goals.
Signed by Huddersfield Town from XYZ Academy in the summer of 2018, he was rewarded with his first professional contract the following year after starring for the youth team.
Meanwhile, still in England, League One club Rotherham United have announced that Joshua Kayode has signed a new contract with the club.
The 19-year-old is now committed to the Millers until 2022, subject to EFL and FA ratification.
Lagos-born Kayode has enjoyed loan spells at Chesterfield and Gateshead since joining Rotherham United, for whom he has made three first team appearances.
Igho Kingsley
Photo Credit : themillers.co.uk