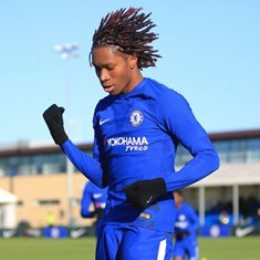 Electrical Services Stadium (Aldershot, Hampshire) on Saturday afternoon to extend their unbeaten start to the campaign.
Fit again midfielder Tariq Uwakwe started for the Blues, while former Flying Eagles invitee Fisayo Dele-Bashiru, goalkeeper Gavin Bazunu, Nat Ogbeta and substitute Felix Nmecha featured for the visitors.
Chelsea led 1-0 at the break thanks to Uwakwe, who was making his seventh appearance in this season's PL 2.
On 12 minutes, the former England U18 international started and finished off a move to score his first goal of the season in all competitions.
The home team doubled their lead after an Ogbeta own goal in the 68th minute, before Rogers headed home a corner to half the deficit with 18 minutes left on the clock.
Chelsea, who have 30 points from 14 games, travel to Everton in their next fixture on Friday, January 24.
Meanwhile, Nigeria U17 international Daniel Jinadu was impressive as West Ham recorded a  2-1 win against Chelsea U18 at the Little Heath Sports Ground this afternoon.
The Golden Eaglets star spent time at the Chelsea Academy before joining the Hammers Academy in December 2017.
Igho Kingsley
Photo Credit : chelseafc.com