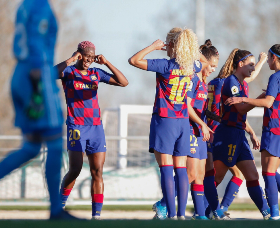 Barcelona's Nigeria captain Asisat Oshoala celebrated being awarded the 2019 African Women's Player of the Year by netting her first ever poker in the European Leagues on Saturday as last year's Champions League finalists thrashed Real Madrid-owned team, CD Tacon 6-0 at the Ciudad Deportiva Real Madrid Campo, allnigeriasoccer.com reports.
Prior to today's game, Oshoala had not managed to score more than two goals in a single game for her European clubs, including Liverpool, Arsenal and Barcelona.
The Super Falcon gave Barcelona a dream start 90 seconds into the game, slotting home from close range after Marta Torrejón delivered a brilliant ball into the box.
At minute 19, the league leaders put the game to bed with Oshoala firing them into a 3-0 lead after combining with Jenni Hermoso.
Two minutes after the restart, the number 20 scored her first hat-trick in Spanish football when she intercepted a poor pass from a CD Tacon defender and lobbed the ball over the goalkeeper, who was off her line, to make it 5-0.
On 63 minutes, Oshoala nodded past the goalkeeper and wrapped up the scoring.
Only Barcelona teammate Jenni Hermoso with 16 goals to her name has scored more than the Nigerian in the Primera División Femenina this season.
Ifeanyi Emmanuel
Photo Credit : fcbarcelona.com