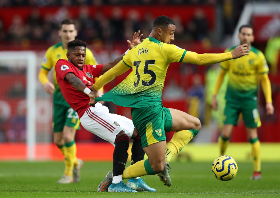 Norwich City coach Daniel Farke has explained that he handed a full English Premier League debut to the Republic of Ireland international of Nigerian descent, Adam Idah against Manchester United due to the unavailability of strikers Teemu Pukki and Josip Drmic.
The talented 18-year-old has been the talk of the town following his hat-trick against Preston North End in the Emirates FA Cup last weekend.
In truth, Idah had a tough afternoon playing in front of more than 73,000 spectators at Old Trafford and had to be replaced in the 65th minute, but he has received encouraging words from the Canaries boss.
Farke was quoted as saying by Norwich's official website after the game : "It was difficult for him in front of 70,000 people to be there with his first appearance in a Premier League starting line-up. Sometimes, you have to jump in the water.

"We got the feeling it was his chance because we have several injured strikers. Teemu Pukki and Josip Drmic will come back in the next days and it was a diffuclt situation.

"We backed him and he worked a lot. I was pleased with his workload and I didn’t expect any miracles from him."
Idah has been included in Norwich City's matchday squad seven times this season and was given playing time in four matches.
Igho Kingsley
Photo Credit : canaries.co.uk