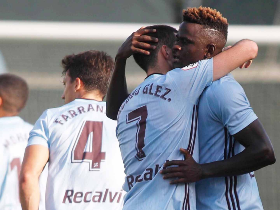 Former Inter Milan trialist Emmanuel Apeh has reached double figures for goals for the first time in his professional career after getting on the scoresheet for Celta Vigo as they registered a comprehensive 5-0 win against Inter de Madrid in a Segunda División B - Grupo I  game on Sunday.
The home team established a three-goal lead through Sergio Bermejo, Alberto Solís and Yaw Yeboah, before Apeh added a fourth goal with nineteen minutes left on the clock, taking his tally for the season to 10 goals.
The 23-year-old has been in blistering form in his last five games in the division, scoring 5 goals which is half of the ten goals Celta Vigo B netted during the period.
In 2014, the SamVic Football Academy product was invited to train with Inter Milan after he was spotted by the Sporting Director of an Italian club while he was on a scouting trip to Nigeria but nothing came out of it.
Apeh has the same playing style as former Inter Milan wonderkid Obafemi Martins.
He was on target against today's opponents on the opening day of the season back in August 2019.
Last year, the promising center forward played two matches for the first team of Celta Vigo in La Liga.
Ifeanyi Emmanuel
Photo Credit : rccelta.es