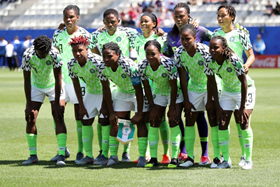 Football governing body FIFA will pay compensation to Barcelona for releasing the CAF African Women's Player of the Year, Asisat Oshoala to the Nigeria Football Federation for the 2019 Women's World Cup which was held in France last summer, allnigeriasoccer.com reports.
FIFA launched the Women's World Cup Club Benefits Programme in 2019 to reward those clubs playing a role in the development of the women's game.
For the 2019 edition of the FIFA Women's World Cup Benefits Programme, the total amount of US$8.48 million will be paid in rewards to clubs and this is part of FIFA's overall contribution of US$50 million for the World Cup in France.
With regard to the payment procedure, the releasing club will be paid 50 percent of the money distributed based on the number of days a player participated in the tournament, while the remaining 50 percent goes to the clubs the player represented from the ages of 12-22 years.
Using Super Falcons captain Oshoala as an example, Nigerian clubs FC Robo, Rivers Angels and Women's Super League sides Liverpool and Arsenal are entitled to receive half of the benefits since she played for those teams before she celebrated her 22nd birthday, while the other half goes to Primera División club Barcelona.
Regarding the Nigeria squad to the tournament in France, FIFA has instructed the Nigeria Football Federation to transfer the amount in question directly to the Nigerian clubs that contributed players, such as Rivers Angels, Nasarawa Amazons, Bayelsa Queens and Robo Queens, on or before January 15, 2020 as the money has already been remitted to the local football regulator.
Ifeanyi Emmanuel