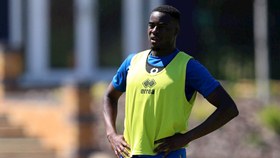 Former Nigeria Football Federation target Fejiri Okenabirhie is being linked with an imminent move to EFL League One club Doncaster Rovers.
Shropshire Star is reporting that the striker is heading for the Shrewsbury Town exit door, with Doncaster targeting a permanent deal for the player.
It does not come as a surprise that Okenabirhie is edging closer to an exit from Shrewsbury Town as he has lost his first place in the first team, starting only six of their 24 matches in the division and scoring only two goals this season.
The 2018-2019 campaign was a banner season for the 23-year-old after contributing to 23 goals (16 goals, 7 assists) in 49 appearances across all competitions for The Blues.
With Okenabirhie's contract set to run out in June, Shrewsbury Town would be looking to cash in on the center forward or lose him for nothing at the end of the season.
Nigeria Football Federation President Amaju Pinnick held talks with Okenabirhie five years ago while he was representing the youth team of Arsenal over committing his international future to the Super Eagles.
The striker has caps for England C team but is no longer eligible to play for the Three Lions following his transfer to a Football League club in 2018.
Ifeanyi Emmanuel
Photo Credit : shrewsburytown.com