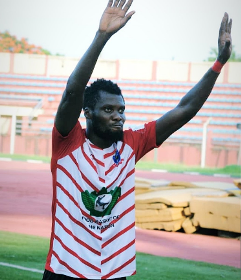 Allnigeriasoccer.com can exclusively report that a Tunisian club are working on a deal to sign one of the standout players in the Nigeria Professional Football League, Alimi Sikiru.
It is understood that negotiations are at an advanced stage and the unnamed Tunisian club are confident of sealing the deal before the close of the January transfer window.
Sikiru has entered the final one year of his contract with Lobi Stars, so an interested club don't have to pay over the odds to acquire him.
The 23-year-old snubbed the overtures of an Algerian top-flight club before entering into negotiations with the club from Tunisia.
Before joining Lobi Stars, he played for Warri Wolves, Sunshine Stars and First Bank.
Sikiru was Lobi Stars' standout player in last season's Champions League, scoring braces against Gor Mahia and ASEC Mimosas, and has earned caps for the Super Eagles B team.
Ifeanyi Emmanuel
Photo Credit : Lobi Stars