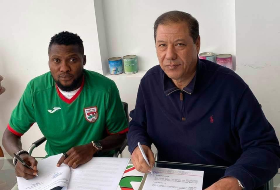 Through a press release published on their official Facebook page, Tunisian Ligue Professionnelle 1  club Stade Tunisien have confirmed the signing of Nigeria international Alimi Sikiru.
The 23-year-old has ended his association with Nigeria Professional Football League outfit Lobi Stars after putting pen to paper on a two-and-a-half-year deal until the end of the 2021-2022 season.
The 1.89 meters tall center forward was in the Super Eagles team that failed to qualify for the African Nations Championship despite scoring two goals against the Hawks of Togo.
On his curriculum vitae, Sikiru lists First Bank, Warri Wolves and Sunshine Stars among his previous clubs.
Nigerian-born strikers Orok Akarandut and George Ekeh previously played for Stade Tunisien, who have been crowned champions of the Tunisian top-flight on four occasions.
Depending on Alimi's fitness and issuance of his International Transfer Certificate by the Nigeria Football Federation, he could make his competitive debut for Stade Tunisien when they face Club Africain in February.
Ifeanyi Emmanuel
Photo Credit : Stade Tunisien