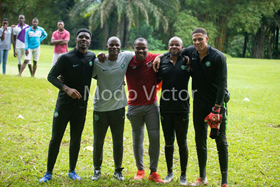 Fortuna Dusseldorf goalkeeper Maduka Okoye has explained the rationale behind his decision to pledge his international to Nigeria over his country of birth, Germany.
With the retirement of ex-Wolves goalie Carl Ikeme for reasons everyone is aware of and planning for the long-term, Super Eagles coach Gernot Rohr was able to convince Okoye to play for the three-time African champions.
In an interview with the Super Eagles Media Team via YouTube, Okoye bared his mind on the nationality debate, saying : "My opinion and my advice is to follow your heart, you have to feel it, where the love is. I felt the love in Nigeria and I feel like a Naija boy, that's why I chose Nigeria over Germany".
The 20-year-old was in the frame to play his first game for Nigeria against Libya's Olympic team last March but Fortuna Dusseldorf played spoil sport by deciding not to release their goalkeeper to the Nigeria Football Federation for the two matches against the North Africans in Tunisia and Asaba.
He was a shock inclusion on the Super Eagles roster for their first match of the 2019-2020 season, a friendly against Ukraine last September.
"I felt great after I got my first call-up to the Super Eagles, it was a pleasure. It's a big step for me in my football career.

"With the first call-up I had a bit of problems but after that for the Ukraine game everything was set up and I prepared well.
"I couldn't wait to get to the Super Eagles, everything went well. Thank God,'' Okoye added.
Okoye made his debut for the Super Eagles in a glamour friendly against Brazil three months ago and was also called up for the 2021 Africa Cup of Nations qualifiers against Benin and Lesotho.
Ifeanyi Emmanuel