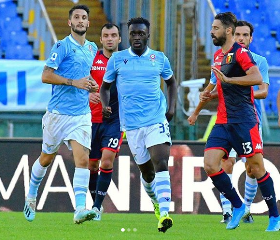 Lazio striker Ciro Immobile has been labelled a legend by former Liverpool wonderkid Bobby Adekanye.
With 20 goals in 18 Serie A appearances, Immobile is the top scorer in the whole of Europe ahead of Bayern Munch's goal machine Robert Lewandowski who has racked up 19 goals this term.
Shortly after making his first start in a domestic game for Lazio against Cremonese on Tuesday, Adekanye revealed that he was honoured to be playing on the same team as Immobile.
In quotes carried by lalaziosiamonoi.it citing Lazio Style Radio, Adekanye stated : " When I can play the game with Ciro Immobile I am happy, for me he is a legend and playing with him is a dream. It makes the game easier.
"Now we have moved on to the quarterfinals with Napoli , we have to play a good game like we did today to pass the round.
"It is an honor for me to be with this team, which is writing history. We have won many games in a row, I am happy, I feel at home.
"All the players have me always helped, even in the most difficult moments "

Adekanye left Liverpool last summer without making a single appearance for the first team of the Premier League side.
The former Barcelona teen sensation has featured in five matches for Lazio, including two starts which came in the group stage of the Europa League and Coppa Italia.
Ifeanyi Emmanuel