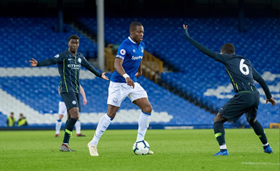 Everton boss Carlo Ancelotti is monitoring at close quarters Nigeria-eligible midfielder Dennis Adeniran, with a view to handing the 21-year-old his first-team debut for the Toffees.
The former Fulham starlet was not in the Everton squad that played out an entertaining 3-3 draw with Arsenal U23s in the Premier League 2 on Monday, and it has come to light he was left out of the roster because he was called up to train with the first team.


Everton have in injury crisis in midfield, with Andre Gomes, Jean Philippe-Gbamin and the versatile Nigeria playmaker Alex Iwobi still on the mend.
"He's been training with the first-team," Everton U23 manager David Unsworth was quoted as saying by the Liverpool Echo.
"He's been in-and-around the first-team squad so it was a great opportunity for someone like Einar [Iversen] to come and play a game tonight.

"There's no issues with Dennis, hopefully he can get an opportunity in the first-team if not on loan but that's not up to me."
Adeniran, who has caps for England U17, U18 and U19 national teams, was included in Everton's 18 for their League Cup match with Leicester City on December 18.
Assurance Akhabue
Photo Credit : evertonfc.com