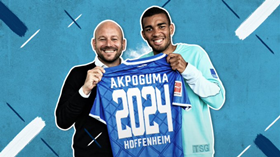 TSG Hoffenheim have announced through their official website that German-born defender of Nigerian descent, Kevin Akpoguma has committed his future to the Bundesliga club.
The new deal will keep the former Germany U20 captain at Hoffenheim until at least the end of the 2023-2024 season.
Akpoguma joined Hoffenheim in July 2013 after stops at Rot-Weiß Speyer, Schwarz-Weiß Speyer, FC Bavaria Wörth, FC Neureut 08 and Karlsruher SC.
Commenting on his new contract, Akpoguma told the club's official website : "I always like to emphasize that I find the perfect environment for me in Hoffenheim and, accordingly, I am grateful for the trust placed in me".
Director of Professional Football, Alexander Rosen added: "Akpo is an extremely determined player who has developed into a reliable Bundesliga professional through our U23 and two loan clubs.
"He is a strong character, with a clear head and outstanding mentality.  Akpoguma embodies the type of modern defender - with incredible athleticism.
"His signature is a clear commitment to the TSG and its path."
Including two appearances in the UEFA Champions League, Akpoguma has played 43 matches for Hoffenheim's first team since making his professional debut.
Igho Kingsley
Photo Credit : achtzehn99.de