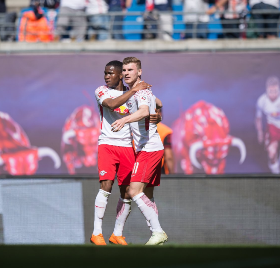 Newcastle United have been dealt a blow in their pursuit of Nigerian winger Ademola Lookman as his German club RB Leipzig have insisted that he won't be loaned out in the January transfer window.
RB Leipzig signed the former England U20 international on a permanent basis from Everton last summer but his second spell in Germany has not been successful so far due to a lack of playing opportunities.
Managing Director of  RB Leipzig, Oliver Mintzlaff has suggested that Lookman will be spending the remainder of the 2019-2020 campaign at the Red Bull Arena.
"It was certainly not an easy first round for him," Mintzlaff told Sky Deutschland.

"Nonetheless, we believe in him and his quality. So we will certainly not loan Ademola Lookman.

"Ademola is a player who has already proven to us that he has a lot of quality."
Lookman cost RB Leipzig in the region of 18 million euros when he was acquired from Everton in July 2019.
Igho Kingsley
Photo Credit : dierotenbullen.com