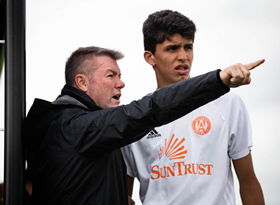 English Premier League side Manchester United have handed a trial to American defender Efrain Morales, 15.
The Atlanta Journal Constitution is reporting that Morales will showoff his qualities to the Red Devils youth team coaches for eight days with a view to a deal when he attains the age of majority.
The Suwanee native has appeared in 82 matches for Atlanta United Academy, scoring 6 goals.
"You can’t turn those experiences down, especially when you are a developing a player," Academy Director Tony Annan said.

"It’s a bonus to our academy that we are producing players of that caliber.

"It gives us a little pat on the back to say we are doing a decent job producing players that can play in the world’s best leagues."
Efrain Morales was called up to train with United States U15 national team in 2018.
Igho Kingsley
Photo Credit : Atlanta United