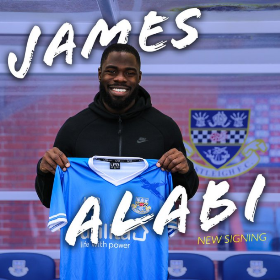 National League outfit Eastleigh Football Club have announce via their official website , the signing of James Alabi on loan from Leyton Orient until the end of the season .


The 25-year old Anglo-Nigerian forward will be seeking for more playing time after he had limited game time this season at the O's under Head coach Ross Embleton.
"I'm happy to be here and can't wait to get started. I hope to hit the ground running and score as many goals as I can'. Alabi said

The forward has only made 13 appearances in total this season for the League Two club including Trophy and Cup fixtures - finding the net once in their 4-0 victory over Grimsby .

Alabi's last competitive game was in November last year and be looking forward to making his debut this Saturday for Spitfires who sit 16th in the National League table and are preparing to host Chesterfield .