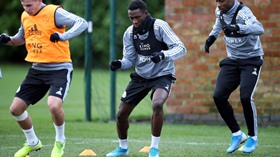 Leicester City coach Brendan Rodgers has provided a positive fitness update on Wilfred Ndidi after the midfielder underwent surgery last week.
The Nigeria international will miss tomorrow's Premier League clash against Burnley - the third game he won't be available for selection since he suffered a training ground injury ahead of the Carabao Cup match vs Aston Villa.
Without the influential midfielder in the squad, the Foxes were unable to beat Southampton and Villa.
Ndidi has taken a step forward in his recovery and was snapped training with the rest of his teammates, including Kelechi Iheaancho, at Belvoir Drive on Friday.
Speaking to the media at Friday's press conference, Rodgers said :"Wilfred Ndidi has made great progress, he’s out on training pitch working, which is great news for us, but he won’t be available for the weekend. We’ll see after that."
Of the eight matches Ndidi has not featured for Leicester City in the Premier League since his arrival from Genk in January 2017, the King Power Stadium outfit have managed to win only twice, against Arsenal (May 2018) and Sheffield United (August 2019).
Ifeanyi Emmanuel
Photo Credit : lcfc.com