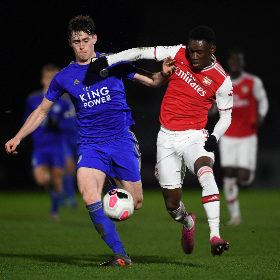 Arsenal ran out 3-0 winners against Leicester City in their Premier League International Cup clash on Friday evening, allnigeriasoccer.com reports.
Several talent spotters were in attendance at Meadow Park to run the rule over the outstanding players on both teams, including representatives from Football League clubs Lincoln City and Stevenage, and they would have been impressed with the performance of the Nigerian teenagers on target for Arsenal.
Defender Tobi Omole, midfielder James Olayinka and striker Folarin Balogun started for the Gunners while the Foxes had fullback Calvin Ughelumba and striker Josh Eppiah on show.

Defenders Joseph Olowu and Daniel Oyegoke were afforded places on the bench for the hosts.

After Robbie Burton had given Arsenal the lead from the spot in the first half, exciting front man, Balogun doubled the advantage in the 59th minute when he curled home a superb goal from the edge of the box.

Shortly after Karl Hein had denied Eppiah handing his side a lifeline at the other end, his compatriot Olayinka joined in on the goal act in the 76th minute when he received a pass from Nathan Torney and slotted past goalkeeper Viktor Johansson for 3-0.

Both of Olowu and Oyegoke enjoyed cameo appearances for Arsenal in the 75th and 89th minutes respectively as they progressed into the knockout stages of the youth cup competition.