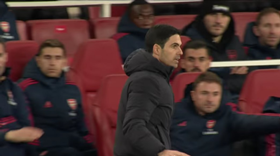 Nigeria-eligible left-back Tolaji Bola continues to edge closer towards making his professional debut for Arsenal, allnigeriasoccer.com reports.
Ahead of the meeting with Sheffield United, Gunners head coach Mikel Arteta had a big decision to make on the player to provide cover for recuperating left-backs Sead Kolašinac and Kieran Tierney and the Spanish football tactician logically settled for Bukayo Saka as the teenage winger has operated in that role in five previous games.
Bola was photographed sitting behind the substitutes during yesterday's meeting at the Emirates Stadium, which confirms that he narrowly missed out on the matchday 18 and was the nineteenth man against The Blades.
The 21-year-old was also the nineteenth man for the away game against Bournemouth on December 26, 2019.
A debut could be on the horizon for the Hale End Academy product, taking into consideration that he has frequently trained with the first team since December.
Bola, who was converted from a central defender to a left-back when he joined Arsenal, was an unused substitute when Arsenal thrashed Nottingham Forest in the League Cup back in September.
Ifeanyi Emmanuel
Photo Credit : Jeorge Bird/Premier League