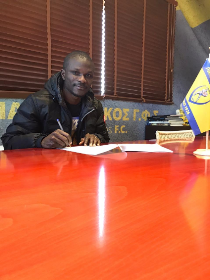 Former Heart of Midlothian star Abiola Dauda has completed a transfer to Panetolikos, the Greek Super League club have announced through their official website.
Dauda has joined Panetolikos from another Greek top-flight team Larissa, for whom he made 14 appearances in the first half of the 2019-2020 season, scoring two goals.
Speaking on his transfer, the Swedish-Nigerian said : "It's nice to be in this club. It's a great challenge for me to play and help the team achieve its goals. The most important thing is to be able to enjoy football . "
Dauda made his name with Kalmar in Sweden and also lists Sölvesborgs GoIF, Red Star Belgrade, Vitesse, Atromitos and Giresunspor among his previous clubs.
For the remainder of this season, he will wear the number 25 jersey at Panetolikos.
Two days after joining the club, Dauda scored on his competitive debut as Panetolikos played out a 1-1 draw with Lamia on Saturday evening.
The 31-year-old was introduced off the bench as a substitute in the 73rd minute and salvaged a draw for his new employer when he found the net in the 95th minute.
Igho Kingsley