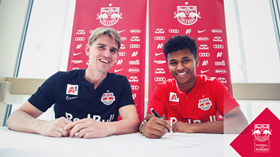 Arsenal, Liverpool and Barcelona amongst other interested European clubs have been dealt a huge blow after Nigeria-eligible youngster Karim Adeyemi signed a new contract with Red Bull Salzburg.
The new deal signed by the Germany youth international will keep him at Red Bull Salsburg until at least June 30, 2024.
The striker, who only turned 18 recently, was heavily linked with a departure from the Red Bull Arena, as a host of top Premier League clubs alongside the Spanish giants pitted themselves in a battle for his signature, but his future has been settled following his latest deal.
Asked by Red Bull Salzburg's official website why he decided to extend his contract despite interest from other teams, Adeyemi answered : "I believe that Salzburg as a city and club suits me well. Here I can develop as best I can.
"I consulted with my family about it and decided to stay here. I am also very happy that everything went so well on the part of the club."
Adeyemi started his club career with FC Bayern München before transferring to SpVgg Unterhaching in 2012.

Currently on loan at Red Bull Salzburg's feeder club FC Liefering, he has scored eight goals and assisted seven more in the Austrian second tier and is being tipped for more exploits this year, reason Salzburg wasted little time in tying him down long-term.