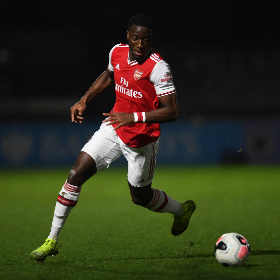 Nigerian-born defender Joseph Olowu netted his first goal for Arsenal U23s in their entertaining 3-3 draw with Everton in a Premier League 2 game on Monday, January 13.
The Super Eagles hopeful was hauled off at half-time, making way for his good pal and fellow Nigerian Tobi Omole.
It was earlier thought to be a strange decision by Arsenal U23s head coach Steve Bould as Olowu gave a good account of himself in the first half, and opened the scoring with a deflected header from a corner kick in the 17th minute.
Allnigeriasoccer.com has done some digging to unravel the reason behind Olowu's substitution and it can be revealed that it wasn't a tactical change but a precautionary move by manager Bould after the player complained about his hamstring.
Olowu shrugged off his injury problems and was in action for Arsenal for the final 15 minutes of their 3-0 thrashing of Leicester City in the Premier League International Cup two days ago.
The 20-year-old has made progress since moving to the Emirates Stadium and a loan move to a Football League club to continue his development cannot be ruled out in 2020.
Ifeanyi Emmanuel
Photo Credit : arsenal.com