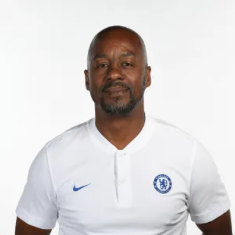 According to matching reports in the Turkish media, Chelsea coach of Nigerian descent Eddie Newton has reached an agreement in principle to join Super Lig side Trabzonspor.
Turkish newspaper Hurriyet is reporting that Newton is expected to arrive at Trabzon this week for the final round of talks with Trabzonspor higher-ups and if an agreement is reached, the 48-year-old will start working as the second assistant of Huseyin Cimsir in the technical team.
A former midfielder with Chelsea who is famous for scoring in the 1997 FA Cup final, Newton is currently serving as manager Frank Lampard's assistant at The Blues.
Before his elevation, he was Chelsea's loan player technical coach between 2016 and 2019, a position that saw him work with the likes of Ola Aina, Kenneth Omeruo, Victor Moses, Ike Ugbo, Tammy Abraham and Fikayo Tomori.
Newton has coached Chelsea legend John Obi Mikel in the past as he served as assistant manager to Roberto Di Matteo and Guus Hiddink in 2012 and 2016 respectively.
Anthony Nwakaeme is the other Nigerian player at Trabzonspor and he impressed in the latest game played by the club, scoring a brace and providing an assist in a 6-0 rout of Kasimpasa.
Ifeanyi Emmanuel
Photo Credit : chelseafc.com