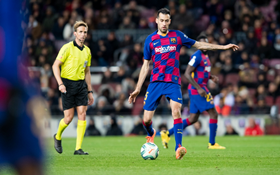 Former Nigeria U20 skipper Ramon Azeez made his eighth start of the 2019-2020 season as Granada lost 1-0 to La Liga champions Barcelona on Sunday night, allnigeriasoccer.com reports.
Unlike the first game at the Estadio Nuevo Los Cármenes, where he needed less than 2 minutes to open the scoring in a 2-0 win, it was a different story yesterday as he struggled and had to be replaced ten minutes into the second half.
According to Barcelona's official website, the Catalan side set season highs for both possession (82.6%) and passes (1,005).
This was only the third time that a La Liga team has made more than 1,000 passes in a game since the 2005-2006 season and the highest possession by Barcelona since May 2011, when they had a possession of 84% under the guidance of Pep Guradiola.
Azeez was outshone by Barcelona trio Arturo Vidal, Sergio Busquets and Ivan Rakitic in midfield.
While the Nigerian touched the ball 17 times, Vidal had 94 touches, Rakitic 107 and Busquets finished with a game-high 179 touches, according to data from OPTA.
Azeez made 8 passes while Busquets, Rakitic and Vidal had passing totals of 157, 98 and 75 respectively.
Ifeanyi Emmanuel