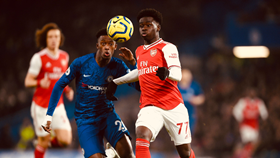 Arsenal showed remarkable strength and character to come from a goal down on two occasions to earn a 2-2 draw with Chelsea in the 200th meeting between the two London rivals on Tuesday night.
Jorginho, from the spot, opened the scoring in the 28th minute, Martinelli equalised with a terrific breakaway goal on 64 minutes, Azpilicueta thought he had won it for the Blues when he found the net in the 84th minute only for stand-in Gunners captain Bellerin to level matters with three minutes remaining.
Nigerian starlet Bukayo Saka filled in at left-back yet again due to the injury enforced absence of Sead Kolašinac and Kieran Tierney and the Hale End Academy product was one of the three Gunners players singled out for praise by Arsenal Invincible Martin Keown after the game at Stamford Bridge.
Speaking on BT Sport, Keown said : "You're watching that team tonight and you are seeing the future out there, Martinelli - his goal, the passion, the spirit. I've been waiting for this for a long time.

"And those people are coming back into the football club. Martinelli, that is some performance tonight.

"Saka, and even Xhaka when he goes to a makeshift central defender, this is as good as I have seen him play. They showed real character.

"For most of that game they were down to ten men and Chelsea that's quite worrying really, they are stuttering at the moment and are just not making it happen in front of goal".
On Saka, he added : "He (Martinelli) is with another 18-year-old playing behind him, Saka, who also played exceptionally well. Really good performances from lots of players tonight".
Predominantly a left winger, Saka has now played as a left-back in his last seven matches for Arsenal's first team.
Ifeanyi Emmanuel
Photo Credit : arsenal.com