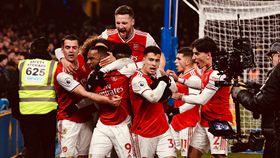 
The Brazilian equalised for the Gunners with Chelsea 1-0 up after getting past N'golo Kante who had slipped. It however finished 2-2 after further goals by Chelsea's Cesar Azpilicueta and a deserved second equaliser from Hector Bellerin.
Keown who was part of the 1998 winning Arsenal side spoke to BT Sport on Martinelli's goal and how similar it was to the one grabbed by another Arsenal and former Nigerian international Nwankwo Kanu.

"I was here in 1999 when Nwankwo Kanu scored three goals to get Arsenal back into it to win a game that they never should have won. I know they were dead and buried where they were down to 10 men, somehow those players found a way to get back into it."

The former Arsenal star believes there is a big future for the Brazilian bought from Ituano FC in his homeland.

"The Martinelli goal, that encaptures the newfound spirit that is now with Arsenal.

"That young man, honestly, he has the club in the palm of his hands," he told BT Sport.

"He was everything tonight, he was the youngest player on the pitch pretty well and he's showing the way to all the other senior players.

Arsenal's next game is an FA Cup clash against Bournemouth on Monday evening.