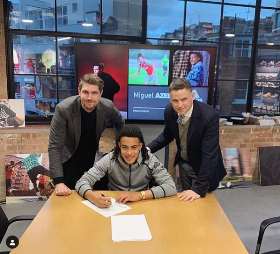 One of the most promising teenagers of Nigerian descent on the books of an English Premier League club, Miguel Azeez has signed a new multi-year deal with German sportswear manufacturer Adidas, allnigeriasoccer.com understands.
It is unknown how much Azeez is getting paid for extending his collaboration with Adidas but it is a bumper deal.
Azeez's English club, Arsenal are also kitted by Adidas, so there is no sponsorship conflict regarding the contract signed by the central midfielder a couple of days ago.
The 17-year-old was featured in an Adidas advertisement alongside Manchester United legends Paul Pogba and David Beckham as well as Real Madrid coach Zinedine Zidane in 2019.
Born to a Nigerian father and Spanish mother, he is eligible to represent Nigeria, England and Spain internationally but the English Football Association are leading the race for his services, having capped him at U16, U17 and U18 levels.
Several Arsenal fans have been raving about the qualities of Azeez and are eagerly waiting for him to break into the first team of the Emirates Stadium outfit.
Meanwhile, the highly-rated midfielder is now training on grass as he steps up his recovery from an injury he suffered in November 2019.
Ifeanyi Emmanuel