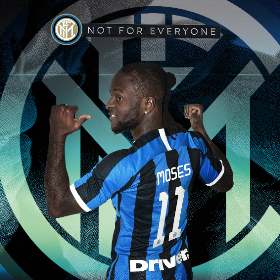 Ex-Nigeria international Victor Moses is the latest Premier League player to join the Nerazzurri, following in the footsteps of former Manchester United stars Romelu Lukaku and Ashley Young, and Alexis Sánchez, who is on loan from the Red Devils.


The versatile wing-back spent much of last year on loan at Fenerbahce before reuniting with his former coach Conte and his deal with Inter Milan has a purchase option at the end of the season.
Speaking to Sky Sports UK, Di Marzio said : "Conte likes the intensity of the Premier League, of the games, of the players, the attitude of training.

"Ashley Young he wanted him to buy him in Chelsea two years ago, in 2017, and Moses with him was incredible, 78 appearances and eight goals in two years.

"The medicals of Moses were very accurate because he had some problems, he had an important medicals for one day before it was made official.

"And because he wants to win the title in Italy and he thinks that experienced Premier League players are in this moment of the tournament in Italy could be very important.
"He has only 14-15 players, he needs two or three more players to change the team."
Moses, 29, was an integral member of Chelsea's title winning squad in 2017 and this is his fifth loan move since his arrival at Stamford Bridge, having previously played for Liverpool, Stoke City, West Ham and Fenerbahce.
Ifeanyi Emmanuel
Photo Credit : inter.it