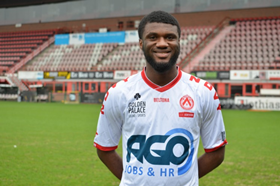 Former Golden Eaglets star Terem Moffi did not live up to his billing when he made his first ever appearance in the Beker van Belgie as Kortrijk were held to a 1-1 draw by Royal Antwerp at the Bosuilstadion (Deurne) on Thursday night.

The striker had received a lot of rave reviews prior to his switch to Kortrijk in the January transfer window after scoring 20 league goals in a single season for Lithuanian outfit Riteriai.


Prior to his full debut for his new employer, Moffi came off the bench to make his league debut for Kortrijk, playing the last 25 minutes as they suffered a 2-0 defeat at the hands of Sint-Truiden six days ago.
The Belgian media were far from impressed with his performance against Royal Antwerp yesterday as he was the lowest rated player on the Kortrijk team.
Handing him a four out of ten, daily newspaper Het Nieuwsblad wrote on Moffi : "He is too light, misplaced passes and probably still lacking some fitness".
Moving from the Lithuanian league to the Belgian top-flight is a good step in Moffi's career and he has to be given time to adapt to his new surrounding.
Ifeanyi Emmanuel
Photo Credit : kvk.be