...the complete Nigerian football portal
Subscribe
'I See Myself In You' - Arsenal Legend Henry Vows To Convert Okwonkwo From Winger To Striker
Published: January 25, 2020 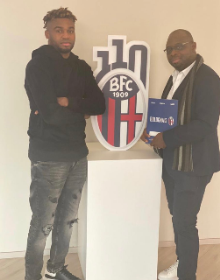 Arsenal legend Thierry Henry is borrowing a page from legendary ex-Arsenal manager Arsene Wenger and has vowed to convert Nigeria U23 international Orji Okwonkwo from a winger to a center forward in the upcoming season.
The Bologna starlet returned to Montreal Impact on a loan deal on Friday, January 24, with an option to purchase the player on a permanent basis as from January 1, 2021.
Montreal Impact manager Henry has compared himself to Okwonkwo, saying he used to be an out-and-out winger in his younger years before Wenger converted him to a striker.
In his debut season in Major League Soccer, the 2015 U17 World Cup winner was mostly deployed as a winger operating from the right and finished the season with 8 goals to his name and two assists.
"Henry was the main reason Orji returned to Montreal Impact, Henry wants him to play as a top striker in the new season, " Okwonkwo's agent Femi Olaniran of Quintessence Sports Management told allnigeriasoccer.com.
"Henry is going to teach him how to play as a striker, he told me he sees himself as a young Orji. Orji has the pace too.
"Henry wants to train Orji exactly how Wenger trained him to become a deadly striker. This is a good move for Orji and he's going to learn at Montreal Impact.
"In his playing days Henry was one of the best strikers in the world and it will help Orji in his future career. "
Named Montreal Impact's Most Valuable Player for the 2019 season, Okwonkwo flew to Montreal on Friday to join his teammates at a training camp ahead of the new season.
Ifeanyi Emmanuel