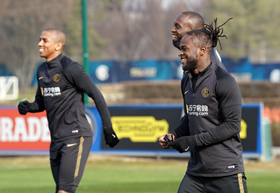 Inter Milan boss Antonio Conte has shed more light on the signings of Victor Moses and Ashley Young from Chelsea and Manchester United respectively in the January transfer window.
The former Chelsea manager explained that he had to go into the transfer market to sign a right wing-back following the departure of Valentino Lazaro to Newcastle United and Young was brought in to provide cover for the injured
Kwadwo Asamoah, stressing that the two players were not galácticos from Real Madrid.
Speaking at Saturday's press conference ahead of the visit of Cagliari, Conte told reporters : "Transfer window? We added Young o make up for Asamoah's serious injury, on the right you talk about Moses, but he arrived because at the same time Lazaro left".

"There are additions, but there are also departures and injuries. And we aren't buying half of the starters on Real Madrid, but rather players that arrive on loan and are 34 years old".
Conte went on to say that the two players signed from Premier League clubs found playing opportunities hard to come by in the first half of the season and the wing-backs have to be given sufficient time to get into shape.
The brand new Nerazzurri number 11, Moses has been training with his teammates ahead of Sunday's matchday 21 clash vs Cagliari.
Igho Kingsley
Photo Credit : inter.it