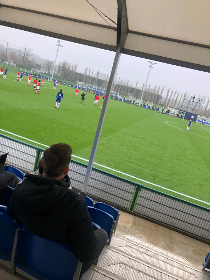 Five players of Nigerian descent were on parade as Chelsea were shocked 4-1 by Charlton Athletic U17 in a friendly staged at Cobham Training Center on Saturday afternoon, allnigeriasoccer.com reports.
With the U18 team traveling to Newcastle United for the quarterfinal of the Premier League Cup, Chelsea arranged a friendly to keep the U16-U18 players in shape ahead of their next matches.
Goalkeeper Kelechi Chibueze, right-back Derrick Abu and central midfielder Dubem Eze all started for Chelsea while Tolu Ladapo and Deji Elerewe were named in Charlton's starting line-up.
While Chibueze went the distance for the home team, Eze was replaced and entered the pitch again as a substitute in the second half.
Blessed with good feet, Charlton's Ladapo is one of the exciting young talents at the academy and has been described as a fast striker who knows his way to goal while his teammate Elewere is a domineering central defender with good passing ability.
Ladapo was a key member of the Addicks U15 squad that reached the final of the 2019 SuperCupNI.
Ifeanyi Emmanuel