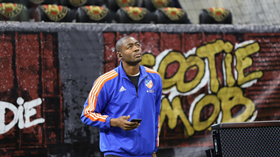 Allnigeriasoccer.com understands that Major League Soccer club Columbus Crew are on the verge of announcing the signing of former Super Eagles invitee Fanendo Adi.
About a week ago, Cincinnati placed him on waivers and deleted his name from the squad list ahead of the start of the 2020 season.
Adi is now a player of Columbus Crew after he was claimed off waivers by the club and he will reunite with his former coach at Portland Timbers, Caleb Porter at The Crew.
The 6-foot-4 striker made 25 appearances for FC Cincinnati after becoming their first-ever designated player, scoring 5 goals during an eighteen-month spell.
Last season, he appeared in 12 games in Major League Soccer, including seven starts, logging 695 points.
Before moving to the American top-flight in 2014, Adi played at FC Copenhagen, AS Trencin, Tavriya Simferopol,  Dynamo Kyiv and Metalurh Donetsk.
Adi is the highest-scoring Nigerian in the history of Major League Soccer with 55 goals from 138 appearances in the regular season.
Ifeanyi Emmanuel