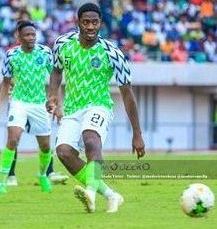 Chelsea product Ola Aina was not named in Torino's matchday squad as they suffered their worst home defeat in the Serie A, a 7-0 loss to Atalanta at the Stadio Olimpico Grande Torino on Saturday night, allnigeriasoccer.com reports.
Manager Walter Mazzarri left the Nigeria international out of the squad because he was suspended due to accumulated bookings.
Aina received his fifth yellow card of the season on the hour mark in the 2-1 loss to Sassuolo on January 18, which triggered an automatic one-match suspension.
The former England U19 skipper was cautioned in earlier matches against AC Milan, Juventus, Inter Milan and Fiorentina.
Of the 21 matches played by Torino in the Italian top-flight, Aina has started 13, was subbed in on four occasions and was a non-playing substitute in three games.
In his debut season in Italy, the versatile wing-back was sent off for the first time in his professional career in Torino's 3-2 loss to Bologna on March 16, 2019.
Igho Kingsley