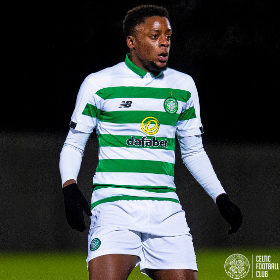 With a statement on their official website, Scottish Championship club Dunfermline Athletic have announced the signing of Republic of Ireland youth international of Nigerian descent, Jonathan Afolabi.
The Celtic-owned striker will spend the remainder of the 2019-2020 season on loan at Dunfermline Athletic.
Afolabi joined the Scottish Premiership champions as a free agent in August 2019 following his release by Southampton but has yet to force his way into the first team under manager Neil Lennon, so has been farmed out on loan to enable him get used to the rigours of senior football.
He was one of the stars of last summer's European U19 Championship, helping the Republic of Ireland reach the semifinals of the tournament and was selected in the official UEFA Team of the Tournament.
Born in Dublin, the promising 20-year-old frontman wore the colours of St. Josephs Boys before moving to the United Kingdom in 2016.
Dunfermline Athletic, who sit fifth in the table, travel to Queen of the South in their next game in the Championship.
Igho Kingsley
Photo Credit : celticfc.net