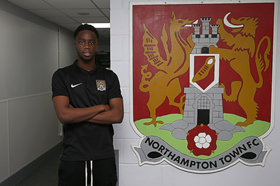 Nigerian midfielder James Olayinka on Monday joined League Two side Northampton Town on loan until the end of the season from Premier League giants Arsenal, informs the official website of the Gunners.

Arsenal confirmed that the loan is subject to regulatory processes.


Olayinka has been in brilliant form in his last four matches for Arsenal's youth teams, scoring against Dinamo Zagreb and Leicester City in the Premier League International Cup and Everton in the Premier League 2.
He traveled with the first team to the United States for pre-season training last summer and was named on the bench for the Europa League group game against Standard Liege in December 2019.
The Nigerian joined up alongside West Brom young striker Callum Morton and both could be available for manager Keith Curle for Tuesday's Sky Bet League Two game against Scunthorpe United.

The duo became the second and third signings of the January transfer window joining winger Mark Marshall who has also signed a short term deal until end of the 2019-2020 season.