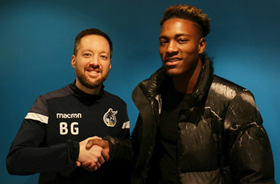 With a statement on their official website, English Football League One club Bristol Rovers have announced the signing of Timmy Abraham.
The Fulham-owned striker will be spending the rest of the 2019-2020 season on loan at the Pirates.
Timmy is the younger brother of Chelsea striker Tammy Abraham, who was heavily courted by the Nigeria Football Federation before becoming cap-tied to the Three Lions in October 2019. 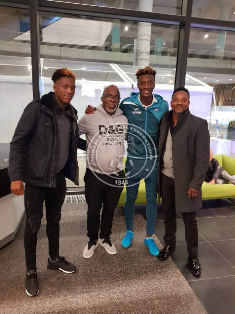 The younger Abraham also met with Nigeria Football Federation supremo Amaju Pinnick when he visited London in 2017 in his failed attempt to convince Tammy to play for the Super Eagles.
Speaking on his new recruit, Bristol Rovers manager Ben Garner said : "Timmy is a player that was identified by the Club prior to my arrival and a deal has been in motion for a long time. We are therefore very pleased to be able to bring him in until the end of the season.

"This is an opportunity for Timmy to experience League football and for us to see if he can impact our team.
"He offers different attributes to what we have and the potential to develop as a player. We welcome Timmy to the club and hope he settles in very quickly".
The 19-year-old Timmy Abraham joined Fulham from Charlton Athletic in July 2017.
Ifeanyi Emmanuel
Photo Credit : NFF/bristolrovers.co.uk