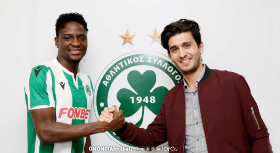 Cypriot First Division club AC Omonia have announced the capture of talented Nigerian winger Babajide David.
The FC Midtjylland star has agreed a loan deal with AC Omonia until June 2020, with an option to buy included in the deal taking him to The Queen.
According to Babajide's agent, Cedric Mazet, former Manchester United defender Henning Berg played a key role in convincing the player to join the club over his other suitors.
"Lot of offers came from Holland, Portugal, France Ligue 2, Turkey and Israel but no agreement was found with his club FC Midtjylland and he was convinced by Henning Berg, the famous Norwegian coach for this challenge,'' Mazet told allnigeriasoccer.com.
"Omonia is the most popular club in Cyprus and fighting for the title this season and in the last eight of the Cup".
Since transferring to FC Midtjylland, David previously enjoyed loan spells at Scandinavian clubs Thisted, Jerv, Haugesund and Rosenborg.
Ifeanyi Emmanuel