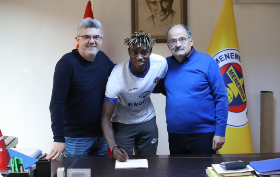 Turkish First League club Menemenspor have completed the signing of Nigerian striker Rasheed Ibrahim Akanbi following a successful trial and issuance of an International Transfer Certificate by the Nigerian Federation.
Allnigeriasoccer.com can exclusively report that Akanbi has put pen to paper on a five-month deal with Menemenspor.
The Turkish second tier club have the unilateral right to extend the player's contract for the 2020-2021, 2021-2022 and 2022-2023 seasons.
Akanbi was extensively scouted in Lagos by a representative of Menemenspor, before he was invited to Turkey for trials with a view to signing a contract.
The 20-year-old has joined Menemenspor from Future Pro Academy, a grassroots club based in Lagos, which produced former Golden Eaglets and Flying Eagles skipper Ramon Azeez.
The deal taking him to Menemenspor was brokered by Dominic Egbukwu of SoccerAfrica Limited.
Ifeanyi Emmanuel