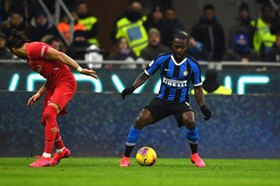 Ex-Inter Milan defender Salvatore Nobile has suggested that Antonio Conte bolstered his squad with the signing of Victor Moses, Ashley Young and Christian Eriksen in the January transfer window because he is always on the lookout for more quality players.
Gabriel Barbosa, Matteo Politano, Valentino Lazaro and Federico Dimarco all departed the Nerazzurri to make way for the arrivals of the three players from the Premier League.
In the 2016-2017 campaign, Moses had his best season as a professional, playing as a right wing-back under the tutelage of Antonio Conte as Chelsea won the Premier League and the Italian gaffer knows the best way to use the former Nigeria international.
In quotes carried by FC Inter News citing Radio Sportiva, Nobile stated : "Priorities have arrived. Conte already knew Victor Moses and Ashley Young but among all I put the arrival of Christian Eriksen on top .
"Antonio Conte's words? For direct competition I can say that Antonio will never be satisfied because he is always looking for something better. We will have to endure and support him, that's how it is".
Moses, 29, could make his Serie A debut in tomorrow's meeting against Udinese at Dacia Arena in Udine.
Igho Kingsley
Photo Credit : inter.it